We take the environmental impact of our operations very seriously.

From a manufacturing perspective, we meet the Restriction of Hazardous Substances Directive 2002/95/EC, (RoHS) on the restriction of the use of certain hazardous substances in electrical and electronic equipment. We use vacuum formed bubble trays for our transformers to eliminate polystyrene protection that is hard to recycle and environmentally unfriendly as this mostly ends up in landfills. We also strive to exceed any requirements and are moving to zero ‘Volatile Organic Compound’ (VOC) varnishes that do not contain harmful solvents that’s safer for our staff, our customers and the environment. 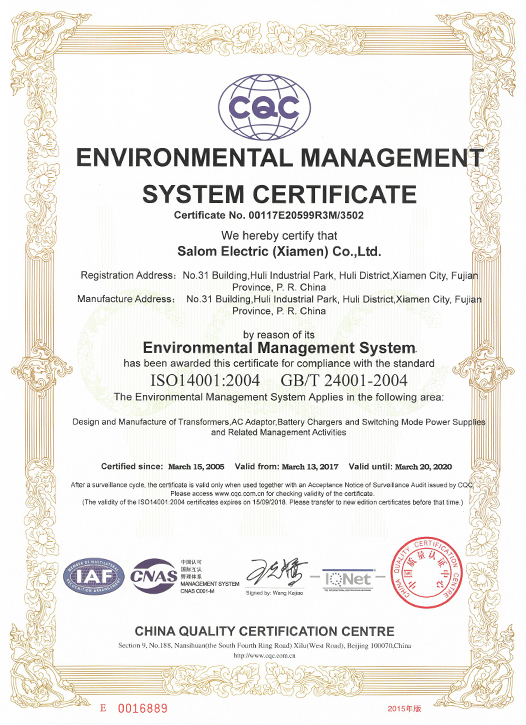 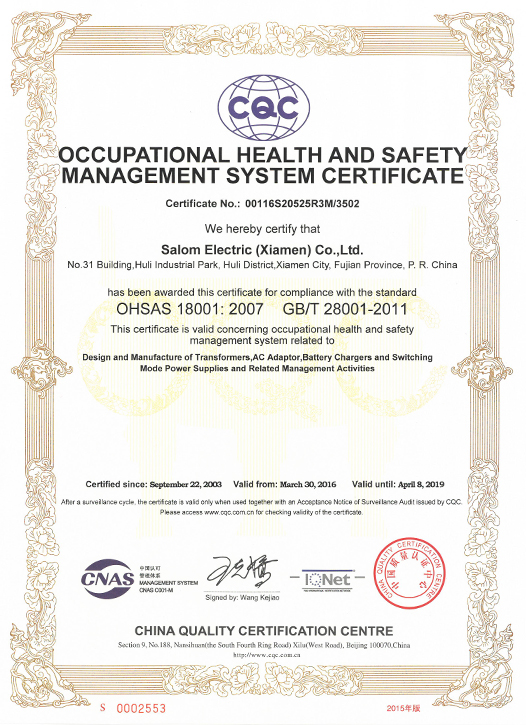 From a design perspective we meet existing and evolving global requirements. The Department of Energy (DoE) in the United States worked with the Lawrence Berkeley National Laboratory (LBNL) in 1998 to assess that the annual standby power consumption accounted for 5% of all residential electricity, which is equivalent to a year’s energy costs of $3 billion. The DoE also predicted that the total electricity consumption in the United States in 2014 was 1.29 billion megawatts, so a waste of 5% is 64 million MWh – equivalent to wasting 18 typical power plant production. The DoE subsequently introduced an efficiency requirement which has evolved over the years. The latest DoE VI specification was introduced in 2014 and became mandatory on 10/02/2016.  This standard mandates more stringent energy efficiency levels tested over more points on the load curve for a greater number of external power supply types. All external power supplies sold in the US must now meet the updated and expanded DoE Level VI energy efficiency requirements.

Many countries are aligned to the DoE with similar specifications. For instance, the European Union (EU) has a voluntary Code of Conduct (CoC) v5 standard that was introduced in 2016 and is expected to become a mandatory Ecodesign requirement in the very near future. This was formed from the results of a study on Miscellaneous Standby Power Consumption of Household Equipment (Molinder, 1997) which calculated an increase in standby losses, including no-load losses for wall packs and chargers from about 8 TWh in 1996 to about 14 TWh in 2006 (Business as Usual scenario). The Code of Conduct implementation anticipated savings of a maximum of 5 TWh per year from 2010, this is equivalent to a total saving of 500 Million EURO per year. In addition, energy losses occur also under load operation because the power conversion efficiency is smaller than one. These losses can be reduced by increasing the power conversion efficiency, resulting in energy savings of the same order of magnitude (1 to 5 TWh). The CoC is formed of two tiers; The Tier 1 standard roughly equates to DOE Level VI and is expected to be introduced first, followed by a tighter Tier 2 standard shortly thereafter.

The performance thresholds for a low (<6Vout) and Basic (>6Vout)  AC-DC external power supply (EPS)  are as follows; 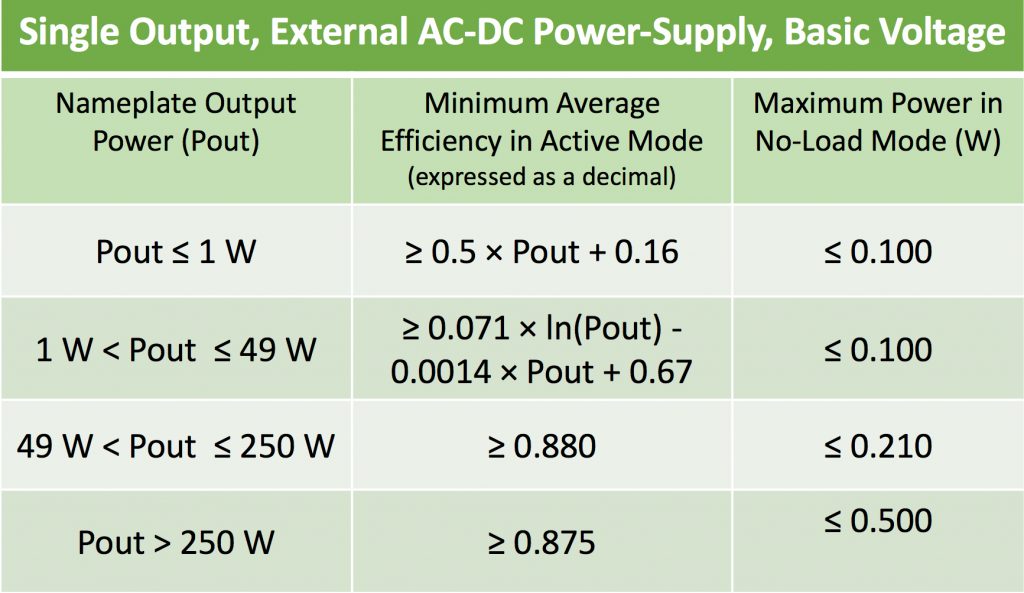 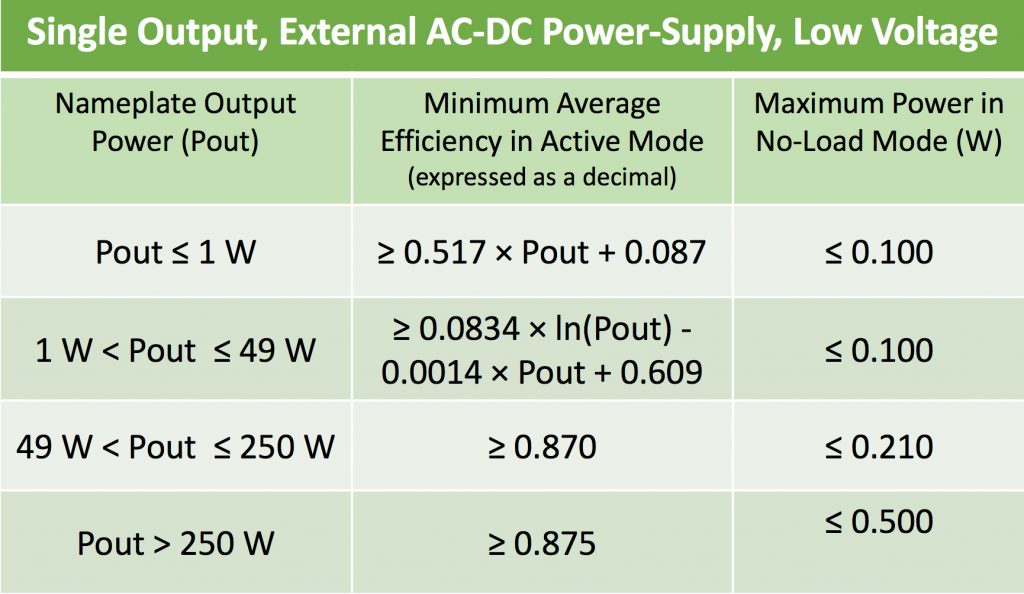 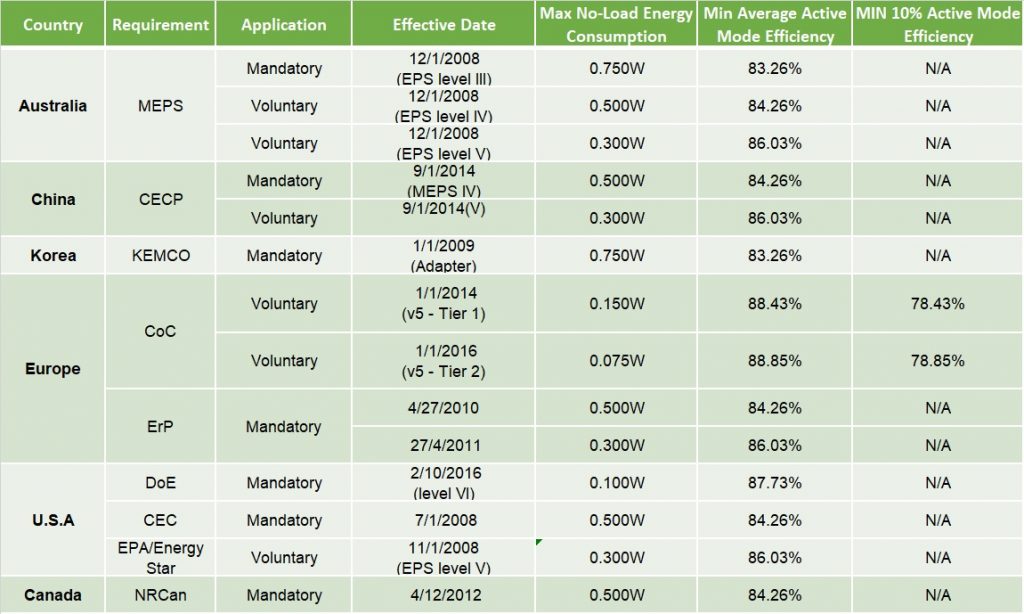 We continually monitor the latest energy efficiency regulations to ensure that our products are fully compliant in all regions where they are sold.